Posted on August 25, 2013 by horseracingsupporter

NOTE: The first rule in Blog writing is “Be CONSISTENT!”  Ok, I broke the rule.  It’s been over a year since I put my thoughts down on virtual paper, but I’m back.  I figure if someone finds this blog in their Internet travels and decides to “follow” it, the least I can do is my part by actually writing. 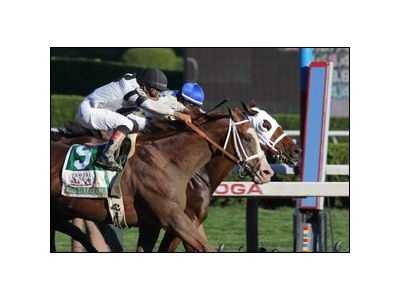 Photo by Patrick Dodson of The Daily Gazette

So, yesterday was the Travers Stakes (Gr. 1) and the winner was not one of the stars of the show.  Will Take Charge was one of those horses that never really made anyone’s Derby Trail radar screen, other than his owners Mr. & Mrs. Willis D. Horton, and his Hall of Fame trainer, D. Wayne Lukas. Despite a win in the Grade 2 Rebel Stakes last winter and a recent second to future Belmont Stakes winner Palace Malice in the Grade 2 Jim Dandy Stakes, there wasn’t a lot of support for the flashy chestnut colt to be anywhere near the track photographer when the two-plus minutes was up.  So imagine the surprise when Grade 1 winner Take Charge Indy‘s little half-brother poured it on at the appropriate time to grind past Kentucky Derby foe Orb and nail fellow shocker Moreno at the wire by a scant 6 inches or so.  Perhaps the only person outside of his immediate connections who were not shocked by the outcome was Blood Horse blogger and columnist, Steve Haskin.  Mr. Haskin warned his loyal readers just before the Belmont to watch two horses as possible spoilers for Orb and Oxbow — Palace Malice….and Will Take Charge.

It took all of about 5 minutes before Twitterland lit up with with excuses and accusatory tweets as to why one of the favorites didn’t win.  Orb was still short from the layoff (honestly, for a few seconds it looked like he was going to score a really nice comeback win). Palace Malice broke badly and never had a chance. Verrazano…..well, in his case, camps were divided between “not his day” and “I told you this horse was a fraud!”

Twitter wasn’t all negativity, though.  Bob Baffert (@Midnitelute) posted just after the race “Moreno ran too good to lose. Another great win for Lukas”.  It was also pointed out that Lukas, just days shy of his 78th birthday, had won the Travers for the first time since he and Thunder Gulch took down the “Summer Derby” in 1995,a month after heading west to take down the Grade 1 Swaps Stakes at Hollywood Park (defeating Da Hoss & Petionville), and 9 weeks after dispatching a field of 10 desperate competitors in the Belmont Stakes (Gr. 1).  It’s been 11 years since he even had an entrant in the Travers, when his two horses finished 7 and last to fellow Hall of Famer Bobby Frankel‘s charge, Medaglia d’Oro.  Finishes like that have had more than one member of the racing community to opine that Lukas runs his horses where they can’t win.  After yesterday’s “can’t win” victory, “Coach” Lukas observed, “I’ve won a lot of races running where I don’t belong.”

Though a Hall of Fame trainer, D. Wayne Lukas hasn’t been blinded by the limelight in recent years, as before.  He’s been a reliable provider of income to his owners, but not as dramatically as he once was, when he was the second leading trainer by earnings to Bob Baffert and ahead of Bobby Frankel, Bill Mott and Todd Pletcher.  Last year he only ranked 81st by earnings.  With highs and lows so prevalent in this business, you can understand Lukas’ comment after the race about long time client Willis D. Horton.
“It is the most wonderful feeling to be able to put somebody who put up his money, stayed by you, believed in you, to give them that moment,” Lukas said. “Three strides from the wire, the only thing I thought of was him and his wife.”

As fans, we talk about the owners, trainers, and jockeys as if they are separate from us, but they aren’t.  They are fans, who unlike most of us, do have that extra connection to the sport that we all dream about. Somewhere along the way, they have been bitten by the same “bug” we all have, but their passion and means has carried them a step farther in the participation level.  When involved at the higher levels of the game, it’s easy to go searching for the next big thing and move horses to the hot trainer, but it shows more than just class for someone playing at the upper levels to hang in with their trainer when he is spending many of his years as a footnote in history.  It’s nice when that passion, dedication, friendship, and respect can be rewarded.  Yesterday was one of those days for the Hortons and D. Wayne Lukas, because they went where some said they didn’t belong.

2 Responses to Going Where He Doesn’t Belong – D. Wayne Lukas